Friday, December 6 marked the 4th annual U-M Men’s Hockey ALS Awareness Game – #IceALS. It was also the first anniversary of the passing of Scott Matzka, who inspired the event. Matzka was a member of the 1998 national championship team and it was his former head coach, Hall of Famer Red Berenson, who began the yearly #IceALS campaign after finding out about the diagnosis of his player. Matzka and his family have since inspired many each year in support of this game. 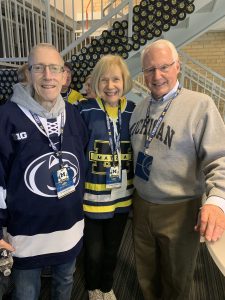 FEATURE STORY I DISCUSSION ON ALS: In the week before the game, Drs. Feldman and Simmons sat down to reminisce about their time together in the 90s, and where ALS research is headed today.

To celebrate the legacy and life of Scott Matzka, his two children, Owen and Reese, dropped the ceremonial puck, flanked by Dr. Feldman and Stephen Goutman, M.D. Fox Sports 1, which nationally televised the game, captured this moving sight and spoke about the importance of the game on this clip:

“[Coach] Mel Pearson said: ‘Some moments are bigger than hockey, they’re bigger than Michigan hockey or bigger than the game. That was one of them.’”—speaking about comments from current U-M Head Coach Mel Pearson, who initially recruited Matzka to U-M, after Matzka visited the locker room following U-M’s win last year, five weeks before his death.

Just as Coach Pearson aptly noted, this game was about so much more than hockey. During the first intermission, the voice of Michigan Hockey Al Randall sat down with Dr. Feldman:

During second intermission, Dr. Feldman was also interviewed on the big screen about the importance of #IceALS and the progress of ALS research:

The Monday after the game, Dr. Goutman, visited Sam Webb and Ira Weintraub on WTKA AM 1050 to recap this special event, including the experience of escorting Matzka’s kids for the puck drop, which included sharing a very special moment with Owen Matzka:

“His son looked up at me and pointed out the 1998 championship title and just said: ‘that’s my dad’s team!’ He was just smiling and having a great time.”  That’s really what it is all about.