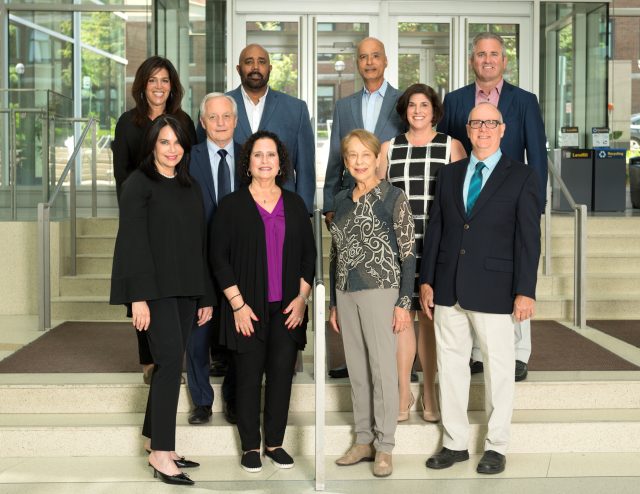 Sheri Mark is a registered nurse, attorney and writer dedicated to the metro Detroit community. From 2011-2013, she was president of the board of directors for North Star Reach Camp, a non-profit organization providing ill children with camp experiences in Pinckney, Michigan. Previously, Mark served as president of the board of directors for Michigan Citizens for Stem Cell Research and Cures, an organization that educates Michigan citizens about stem cell research. Mark’s first cousin died of ALS in 2003 at the age of 50 after suffering with ALS for seven years. A year later, Mark’s step-father died of ALS after suffering with ALS for one year. She acquired her Bachelor of Science in Nursing from the University of Detroit Mercy, and her Doctor of Law from Wayne State University. She and her husband, Dr. Abe Slaim, reside in Bloomfield Village, Michigan.

Hilary King is the current president of Temple Israel, the largest reform Jewish congregation in North America. She has held a leadership role at Temple Israel for more than twelve years. In her capacity as president, Hilary is responsible for overseeing the executive committee and operations, fundraising initiatives and strategic planning. In addition, Hilary served as a past board member of the Anti-Defamation League and spearheaded two major fundraisers for Michigan Medicine. Previously, she organized A Match for Life, a bone marrow drive resulting in more than 15,000 people signing up for the national marrow registry. Before devoting her time to community service, Hilary worked in the broadcast and media industry. She and her husband, Edan, reside in Bloomfield Hills, Michigan, and have three sons.

Harold Burrell, Jr., is partner, senior vice president and account executive of Lighthouse Insurance Group (LIG) in Grand Rapids, Michigan. With more than 30 years of experience in the insurance industry, he served on the board of directors for LIG from 2001-2018. Currently, he serves as an executive board member for the ALS Association – Michigan Chapter. He is also active on the board of directors for Goodwill Industries of West Michigan and the advisory board for the West Michigan Sports Commission. Additionally, he is appointed to the agent advisory board for Donegal Michigan Insurance Company and the advisory board for Horizon Bank. Burrell earned his bachelor’s degree in business administration and management from the University of South Carolina.

John Scarbrough, a lifelong resident of the Ann Arbor area, is a retired global automotive supplier executive with many years of management experience in sales, engineering, and manufacturing. He holds a Bachelor of Science in manufacturing technology from Eastern Michigan University. Scarbrough is family-oriented, with children and grandchildren in the area, and has personal experience with ALS, as his wife was diagnosed with ALS in early 2014 at the University of Michigan Multidisciplinary ALS Clinic. Honoring her 2016 passing, John has organized successful individual walking events to raise funds for the ALS Association.

Doris Fortier Allen is a respiratory therapist at the Henry Ford Health System’s Harry J. Hoenselaar ALS Clinic. She has more than three decades of experience in respiratory care and ventilatory support. Allen’s prior experiences include serving on the board of directors of the ALS Association – Michigan Chapter, management of St. John Providence Park Hospital Cardiopulmonary Services and the Sleep Disorders Center, and as a regional clinical specialist for ResMed, an international medical device company specializing in non-invasive ventilatory support systems. She is a Madonna University graduate with a Bachelor of Science in allied health administration and additional training in respiratory therapy. She and her husband, Dr. William T. Allen, reside in Gregory, Michigan.

Dr. William T. Allen is a retired pulmonary and critical care physician. Beyond medical staff leadership positions, he has hospital executive management experience at St. Joseph Mercy Hospitals in Pontiac and Ann Arbor, and has served on hospital boards. He served on the clinical faculty of the University of Michigan (U-M) Medical School and was an adjunct associate professor of executive education at U-M’s Ross School of Business. With undergraduate and medical degrees from Michigan State University, Dr. Allen was a fellow in pulmonary and critical care medicine at the U-M Medical Center. He also received a Master of Health Services Administration from the U-M School of Public Health. Most recently, he worked as a healthcare consultant, developing and implementing clinically integrated networks nationwide. Dr. Allen and his wife, Doris, reside in Gregory, Michigan.

Christina Clark lost her son, Peter, to ALS in 2003 after an eight-year battle with the disease. She is a former trustee of the ALS Association and was a member of the National Institutes of Health Director’s Council of Public Representatives from 2005-2009. Clark is the founder and president of the Foundation for Interdisciplinary Motor Neuron Medicine, focusing on innovative therapeutic research for ALS and adaptive clinical trial designs. Clark holds degrees from Cornell, Harvard, and Michigan State Universities. She resides with her husband, Emory, on their farm in Metamora, Michigan.

David Forbes is a partner of The Forbes Company, a nationally recognized developer, as well as owner and manager of luxury shopping destinations throughout Michigan and Florida. He is responsible for all aspects of leasing for these landmark retail properties. A University of Miami alumnus, he is on the board of the University of Michigan’s (U-M) Parent Council, the Cranbrook Schools Board of Directors in Bloomfield Hills, Michigan, and is a member of the International Council of Shopping Centers. The Forbes name is connected to U-M through academics, athletics and the recently announced Forbes Institute for Cancer Discovery. While two of Forbes’ children are U-M graduates, he also has two 17-year-old boys and a 6-month-old girl. Forbes’ close friend and colleague, Derek Wood, was diagnosed with ALS in 2016, which prompted his collaboration with the ALS Center of Excellence.

Jon Gerych is the owner and CEO of Gerych’s Special Events and Floral Design in Fenton and Birmingham. Since taking on the business from his father in 1975, he has planned thousands of high-end weddings and celebrations throughout metro Detroit. In 2016, Gerych’s Flowers was voted Readers’ Choice Best Florist in Detroit Metro Times. Jon’s wife of 30 years, Jo-Ann, passed away due to ALS in 2018. A native of Fenton, Jon has four children -Tom, Amanda, Alexis, Kelly – and eight grandchildren.

Lauren Hendel accepted a position with Spotify in New York following the 2019 completion of her Bachelor of Business Administration degree from the University of Michigan’s (U-M) Ross School of Business. Upon her father’s development of ALS in 2016, she founded A Lot Stronger (ALS) Together, the first student-run organization at U-M dedicated to supporting ALS research. The club has teamed up with Michigan Medicine’s Office of Development to generate awareness and create fundraising events to benefit local ALS research and U-M’s Multidisciplinary ALS Clinic. Hendel, originally from Scarsdale, New York, launched a website to raise awareness and funds for the clinic by selling customized apparel.

Jim Hiller is a licensed attorney and has been a member of the State and Federal Bar Association since 1973. He is the former president and CEO of Hiller’s Markets. He was the recipient of Michigan’s Top Executive Award from Corp Magazine and the Focus Detroit Award for outstanding contributions to the Detroit region. As a philanthropist, Hiller formed and endowed the University of Michigan Program for Neurology Research & Discovery (PFUND/PNRD), which is led by Dr. Eva Feldman, and the Hiller ALS Center at Wayne State University. Hiller has held a variety of positions in the Detroit area medical community. He serves on the University of Michigan Health System Advisory Board, was a former member of the ALS of Michigan Board of Directors and the Beaumont Hospital Board of Trustees. A native of Detroit, Hiller graduated from the University of Detroit Law School, where he received the Outstanding Student Award, and was awarded the University of Detroit Mercy School of Law Dean John P. Scallon Award. Jim and his wife, Marge, have three sons – Justin, Andrew and Spencer.

Willard Holt III is an of counsel attorney at Plunkett Cooney in Bloomfield Hills, Michigan. Since joining the firm in 2005, Holt focuses on business law and estate planning. He is also a member of Plunkett Cooney’s Business Advisory Group and is a leading practitioner in the legal formation, structure, and operation of Minority Business Enterprises and Women-Owned Business Enterprises. Previously, Holt was CEO of Phoenix Medical Financial Services, Inc., and partner at Raymond & Prokop, P.C. Currently, he is engaged with The Midnight Golf Program, which helps under-served young people transition from high school to college and into a professional career. A graduate of Detroit Country Day School, Holt holds a bachelor’s degree from Wesleyan University, as well as Doctor of Law and Master of Laws-Taxation from Georgetown University Law Center.

Scott Pranger is the principal manager for the Pranger Family Foundation, founded in 2012 to get involved with education, community affairs and religious causes. From 2004-2012, Pranger was the CEO and owner of EQI, LTD., which sources metal castings, forgings, and fabrications from suppliers around the globe to customers in 13 countries. Prior to EQI, Pranger served as vice president of Kurdziel Industries, Inc., for 20 years. In 2015, Pranger lost his wife, Cathleen, to ALS after a nearly 15-year battle. In her honor, he has been a strong supporter of the ALS Association. He is a 20-year board member of Junior Achievement of the Michigan Great Lakes and supports numerous Christian organizations around the world. Pranger resides in Spring Lake, Michigan, and has one son attending college and a daughter living in Florida with three grandchildren.

Lisa Rosenberg is the founder and owner of Closet NV, a high-end designer consignment boutique in West Bloomfield. Lisa is a graduate of the University of Michigan and earned her law degree from the University of Detroit School of Law. She has previously served on the ALS Association of Michigan’s Board of Directors, a role she pursued after her father, Sanford Roth, was diagnosed with ALS when he was 66 years old. Lisa has spearheaded numerous fundraisers for Dr. Eva Feldman and U-M. She and her husband, Mark, have been married for 30 years and have two daughters.

Since 1995, Dr. Brian Roth has been the medical director of Ascension Providence Rochester Hospital (formerly Crittenton Hospital), a 24-bed inpatient rehabilitation center. He is also the president of Specialists in Rehabilitation Medicine, P.C. Dr. Roth’s focus is on the outpatient care of the musculoskeletal and central nervous systems, as well as the inpatient care of people with life altering conditions, such as strokes and spinal cord injuries. In 2012, Crittenton Hospital chose him as its “Physician of the Year.” On numerous occasions, Dr. Roth has been named “Top Doc” by Hour Magazine and “Medical Director of the Year” by RehabCare. He is also an assistant professor in physical medicine and rehabilitation (PM&R) at Wayne State University (WSU) School of Medicine. A native of Detroit, Dr. Roth graduated from Michigan State University and received his medical degree at WSU. Dr. Roth completed a four-year PM&R Residency at Sinai Hospital in Detroit, serving as chief resident in his final year. Dr. Roth and his wife have two children and reside in Birmingham, Michigan.

Ari Weinzweig, a Chicago native and University of Michigan alumnus, is a co-owner and founding partner of Zingerman’s Delicatessen, a nationally-renowned restaurant that has grown into a community of more than 10 businesses. He has served as a board member and president of the American Cheese Society and as a board member of the Retail Division of the National Association for the Specialty Food Trade. Weinzweig is also an author and frequent guest speaker in business classes at the University of Michigan and Eastern Michigan University, as well as at national and international food and business conferences. Zingerman’s was instrumental in the founding of Food Gatherers, a perishable food rescue program, and continues to be a major supporter of the organization. Weinzweig resides in Ann Arbor, Michigan.