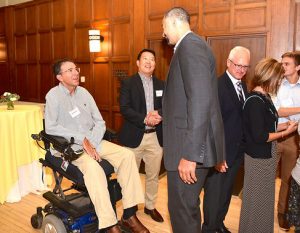 Former members of Michigan Wolverine basketball joined the ALS Center of Excellence for Hoops Fight ALS—a program of events to raise money for the University of Michigan ALS Center for Excellence. The weekend was the brainchild of Josh Stoler, Mark Hughes, Louis Bullock and Alan Schrager, who were inspired by members in their community who are battling the disease, including Mark Fisher, the son of former U-M basketball coach, Steve Fisher. 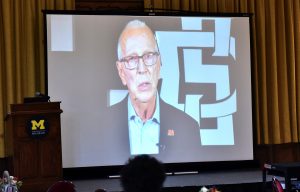 A private evening of friends, science and fun kicked off the festivities Friday night at the Michigan League, highlighted by a program hosted by CBS sportscaster Tracy Wolfson, who is a Michigan Wolverine herself. In an emotional video Coach Fisher spoke about the importance of supporting those fighting this disease and how his son Mark is such an inspiration, and still works with the basketball program at San Diego State. Current head coach at that university, Brian Dutcher – who served under Coach Fisher at both U-M and San Diego State – flew in from the West Coast to support the cause. 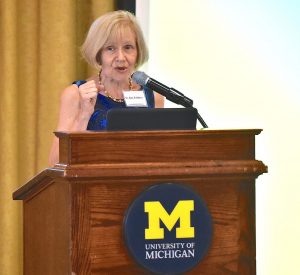 Dr. Eva Feldman, director of the ALS Center, described her laboratory’s research, which the weekend would be benefiting, in particular the repurposing of an immunotherapy drug already approved by the FDA to be used to treat ALS patients. To cap off the program, Fab Five member and new U-M basketball coach, Juwan Howard , spoke with Wolfson about what it is like to be back on campus and why he took the time to support Hoops Fight ALS.

Listen to Dr. Feldman’s Recap of the Weekend on AM 1050 WTKA 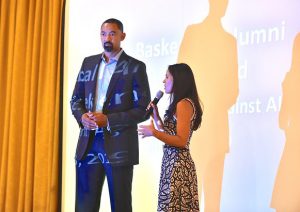 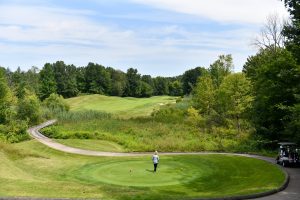 On Saturday, a number of members from both the basketball and ALS families headed out to Moose Ridge Golf Course in South Lyon, kindly donated by Bill Shortt DDS, for a scramble tournament, which was won by a group of four including Scott Pranger, Harold Burrell Jr., former U-M basketball player, Mark Hughes and Ronald Reinke. 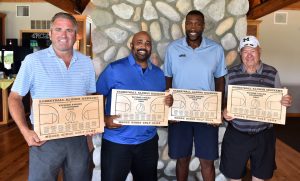 Hoops Fight Against ALS was capped off by a week-long online auction, which was open to the public. The items that were available to bid on included some unique experiences, including a four-day, three-night package for the 2019 Battle 4 Atlantis Basketball Tournament in the Bahamas; seven-day lodging in the Turks & Caicos and premium tickets to sporting events – U-M football tickets on the 50-yard-line against  Notre Dame, the latter of which came with a catered tailgate; U-M basketball tickets against Michigan State; courtside seats for the Detroit Pistons and players club seats for the Detroit Red Wings.