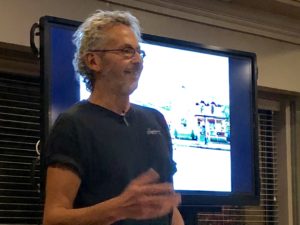 ANN ARBOR – Ann Arbor Active Against ALS, a non-profit organization, held its 10-Year Anniversary Gala on Saturday (Nov. 10) at the Travis Pointe Country Club. Ari Weinzweig, co-founder of Zingerman’s Delicatessen and a board member of the ALS Center of Excellence at Michigan Medicine, gave the keynote address, while Ann Arbor Active Against ALS Board President Michael Meister was the master of ceremony. Also in attendance from the ALS Center of Excellence were Research Director Eva Feldman, M.D., Ph.D., and Managing Director Mike Ritter, M.D.

Ann Arbor Active Against ALS is a grass-roots organization that was formed in the summer of 2008, after a group of friends and colleagues of Dr. Bob Schoeni learned of his ALS diagnosis. Dr. Schoeni and his wife, Dr. Gretchen Spreitzer, were an inspiring presence at the gala. They demonstrated the reason for the love and friendship of the volunteers and board of directors of this group, and their dedication to the cause of fighting ALS through funding research.

Ann Arbor Active Against ALS raises money with numerous annual events and donates those funds to various national research programs, including our own University of Michigan Assistant Professor Sami Barmada, M.D., Ph.D. Since its founding in 2008, Ann Arbor Active Against ALS has raised more than $550,000 dollars to support ALS research. To read more about this outstanding organization, please visit its website, activeagainstALS.org.