Scott Matzka, who played for U-M from 1997-2001 and assisted on the goal that gave the Wolverines the 1998 NCAA Championship, was diagnosed with ALS in 2014. Former Michigan player Jim Ballantine (1988-1991), died from ALS in 2002. And Joe Feudi, the husband of Yost Arena business office manager Jill Feudi, is also fighting the disease. 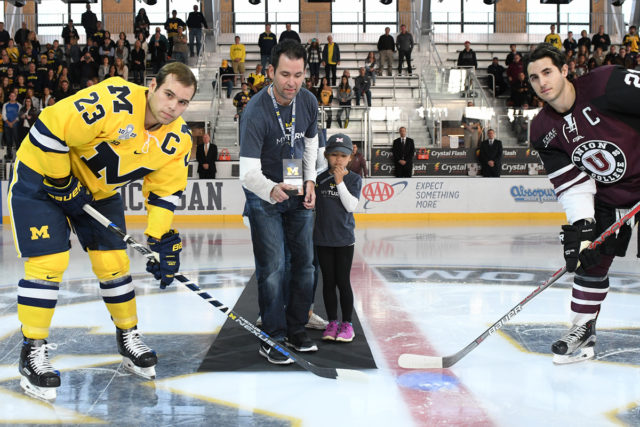 That’s why, for the second straight year, the University of Michigan’s hockey team will hold an ALS Awareness game to bring more attention to the degenerative nerve disease, when the Wolverines face off to #IceALS at 7:30 p.m. February 3 against Wisconsin.

The University of Michigan’s Comprehensive ALS Clinic, which specializes in treating ALS patients and conducting groundbreaking ALS research, will be present at Yost Arena to help hockey fans better understand just how devastating ALS is to patients and their families.

“We see every week in the clinic how ALS profoundly impacts lives, and we work closely with our laboratories to understand how ALS progresses – and hopefully learn how we can finally stop it,” said ALS Clinic Director Stephen A. Goutman, MD. “Raising awareness about ALS is critical to our work, and having the Michigan hockey program in our corner is incredibly valuable.”

Scott Matzka and his family will be in the crowd on Feb. 3.

“As a former Wolverine hockey player, I am extremely proud and excited to see how the Michigan hockey program has shown support for me and the ALS cause,” Matzka said in an email. “Ultimately, I am so moved by the hockey program and former teammates with their level of support! It means so much to me and my family!”

ALS is a disease that steadily kills the nerves that control muscles. Patients lose the ability to control their limbs, facial muscles, swallowing, and eventually, the ability to breathe. Typically, patients die between 2-5 years after diagnosis. There is no known cure.

But ALS wreaks havoc on patients’ families as well. Many ALS-related medical services are not covered by insurance, and care for ALS patients is so intensive that family members frequently have to give up their jobs. Medical expenses and lost income amounts to hundreds of thousands of dollars.

Make a donation to the University of Michigan Comprehensive ALS Clinic.