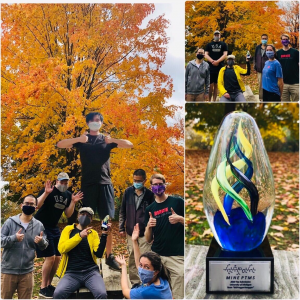 Dr. Alexey Nesvizhskii’s laboratory from the University of Michigan Department of Computational Medicine and Bioinformatics recently won the #ALSMinePTMs challenge, which was put on by News in Proteomics Research. The goal of the data mining challenge was to reanalyze an amyotrophic lateral sclerosis (ALS) dataset from 2018 to identify new post-translational modifications (PTMs) on proteins in cerebrospinal fluid samples.

Led by Bioinformatics Ph.D. students Kevin Yang and Daniel Geiszler, the Nesvizhskii lab competed against more than 30 teams spread across the United States (including: Johns Hopkins University, Massachusetts Institute of Technology, University of Pennsylvania) and around the world (including: Australia, Israel, Switzerland).

The Nesvizhskii lab earned first place for its detection of several differentially expressed modified proteins between ALS and healthy samples. The lab also searched the literature and found some preliminary evidence that these PTMs could be linked to biological mechanisms like aging or oxidative stress, but follow-up wet lab studies are necessary before making further conclusions. The lab intends to write a scientific paper that summarizes its findings as a result of the #ALSMinePTMs challenge.