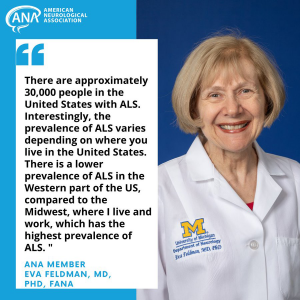 courtesy of the ANA

For this month’s ANA Q&A, we are featuring ALS Awareness Month, and we spoke with Eva Feldman, MD, PhD, FANA. Dr. Feldman is the Russell N. DeJong Professor of Neurology at Michigan Medicine, where she also serves as Director of the ALS Center of Excellence and Director of the NeuroNetwork for Emerging Therapies. She discusses ALS advocacy, the ALS patient population, new research, and more.

What does the public need to understand about ALS advocacy that it often doesn’t?

ALS advocacy is critical to the end goal that the public, the scientific community, and neurologists all share, and that is understanding the cause of ALS and, in parallel, developing new cures and treatments. Without advocacy, the associations and governmental bodies that fund our work truly don’t understand the importance of the disease and what it means to the general population. It’s not just the patient who is affected; it’s the patient’s family and friends as well. Without us going out as scientists, laypeople, patients, and family members, and telling our stories, we will not be able to inform the public of the critical urgency of combatting ALS.

We do have some very positive public support. We have two back-to-back papers on ALS in the May 2022 twentieth-anniversary issue of The Lancet Neurology to increase awareness, to help increase advocacy, and help us move this field forward. And public support isn’t limited to the academic community; sports teams, among others, are engaged. Many sports teams, particularly baseball teams, not just here in Michigan but also throughout the country, have been strong advocates for ALS, largely because of Lou Gehrig, the famous Yankees baseball player who died of ALS in 1941. Because of him, the disease is frequently referred to as Lou Gehrig’s disease. Here at the University of Michigan, our current baseball coach is particularly passionate about ALS advocacy, as his baseball mentor also died of the disease.

What is known about the ALS patient population?

There is an increased risk of developing ALS if you have served in the military, as well. And there is also an increased risk if you’re male, though only up until the age of 65. After that age, the sex difference in new-onset ALS patients is minimal. The average age of someone with ALS is about 55 to 60. But we see all ages.

Finally, we do know that about 15% of ALS is inherited. There’s a monogenic form of ALS, where if you inherit one of 40 known genes, you will likely develop the disease. The remaining 85% of patients are considered to have sporadic disease lacking a monogenic mutation.

In addition to the genetic role you just described, is there a role for environmental exposures?

We also recently received a National Institutes of Health (NIH) Director’s Transformative Grant to both continue and grow our research efforts on understanding the intersection between the environment and ALS. This grant, entitled Developing novel strategies for personalized treatment and prevention of ALS: Leveraging the global exposome, genome, epigenome, metabolome, and inflammasome with data science in a case/control cohort — will supplement a second, separate new ALS grant from the Centers for Disease Control (CDC) focused on air pollution and ALS. It’s known that air pollution is a risk factor for Alzheimer’s disease and Parkinson’s disease. Our research now shows that air pollution is likely a risk factor for ALS. As you begin to address social justice and health justice, it’s important to be aware that individuals who live in urban environments and polluted areas likely are at higher risk for ALS, and probably other neurodegenerative diseases as well.

How are current ALS treatments similar to and different from previous treatments?

There’s currently a great deal of excitement in ALS research. There is a confluence of scientific mechanisms that all coalesce and point to the importance of neuroinflammation in ALS. There are now multiple clinical trials targeting the immune system with a host of new drugs. Whether inflammation is a reaction to the disease or whether it actually causes the disease itself is unknown. But if you can manipulate the immune system, you may either prevent ALS or at least decrease progression.

The second exciting development concerns gene therapy. There’s a currently planned new phase III trial centered around one of the monogenic genes, superoxide dismutase 1 (SOD1). The trial will be performed with individuals who carry the gene but are presymptomatic. The gene therapy product, an antisense oligonucleotide against SOD1, is administered into the spinal fluid of presymptomatic individuals over the course of two years. All previous studies have been done in patients who carry the gene but already have symptoms, and the prevailing thought is that the disease is too advanced by that time for gene therapy to be helpful.

Another clear advance is how we approach clinical trials. Co-opting from cancer research, which has done this for a while, our current clinical trials, for example, will have five arms: one placebo arm and four active arms. The trials are also shorter now — six months. If you’ve been on a drug for six months and are still eligible, you can opt to stay on the drug in some instances. If you received a placebo, you can opt to enter one of the drug arms. This new approach provides patients more hope and opportunities and allows us to test more therapies in a much more efficient manner.

What research is your lab undertaking to better understand and treat ALS?

In addition to our work looking at the association between ALS and the presence of environmental pollutants, we’re also integrating the genetic and metabolomic profiles of our patients with environmental exposures. We know that long-term exposure to pollution results in DNA methylation, and that, in turn, affects RNA, which in turn affects the proteins produced by the cell. These proteins dictate cell health and function. We recently submitted 770 patient samples for DNA and RNA sequencing as part of our new NIH grant — so stay tuned for exciting results.

We also examine the immune profiles of all our patients, and we have found specific immune signatures in our patients. This is research led by Drs. Stephen Goutman and Benjamin Murdock as part of our NeuroNetwork. These findings are critical and confirm certain immune cells are targets for drug therapies. One family of immune cells, called natural killer (NK) cells, is a target in rheumatologic diseases. Approved drugs developed for these diseases can be repurposed for ALS. This is another area that we are very actively involved in.

A third area concerns a project being led by Dr. Stephen Goutman. We’ve just applied to the CDC for a new grant to form a prospective cohort of 5,000 production workers in the state of Michigan. We hope to follow them prospectively over decades. Our goal will be to discover what percentage of these workers develop ALS and, of those that develop ALS, what factors underlie their susceptibility to disease.

How has the ANA supported ALS research?

The ANA has been very supportive of ALS research. There are always critical talks on ALS at the annual ANA meetings. In 2022, the ANA held an entire symposium on ALS, which I thought was extremely helpful to inform our colleagues about the state of ALS research. Dr. Jensen, the president of the ANA, proposed the ANA present a similar ALS symposium at the upcoming Society for Neuroscience meeting in November 2022, and the ANA was recently informed this proposal has been accepted. So not only does the leadership of the ANA promote ALS in its own meetings but it also helps to promote ALS more broadly across other meeting venues. The support from the ANA is very important, and the ALS community, including our patients and their families, truly appreciate that support.

Want to learn about more of the groundbreaking research being conducted by ANA members? Read past editions of The ANA Q&A.