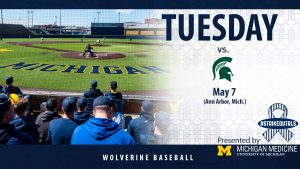 The University of Michigan baseball team will host rival Michigan State on Tuesday (May 7) at 6 p.m., in the inaugural Strikeout ALS Game, presented by Michigan Medicine’s ALS Center of Excellence.  The game will be televised on the Big Ten Network and broadcast in Ann Arbor on WLBY 1290 AM.

The Michigan baseball program’s coaching staff has been significantly impacted by amyotrophic lateral sclerosis, also known as ALS or Lou Gehrig’s Disease. U-M Head Coach Erik Bakich and U-M Assistant Head Coach Nick Schnabel both played for East Carolina University during the 1999 and 2000 seasons under the direction of Head Coach Keith LeClair. In 2001, LeClair was diagnosed with ALS and he passed away in 2006. To honor their coach’s memory, both Bakich and Schnabel wear the number 23 jersey at U-M.

Numerous activities and promotions are available throughout the evening as the baseball program continues its participation in generating awareness and support in the fight against ALS. The ALS Center of Excellence will have a table on the concourse to share information about research and treatment. Dr. Stephen Goutman, director of the U-M Multidisciplinary ALS Clinic, will throw out the first pitch. The first 500 fans in attendance will receive a StrikeoutALS K Card. Both U-M and MSU will wear #StrikeoutALS stickers on their batting helmets.