Developing the next generation of treatments for amyotrophic lateral sclerosis, better known as ALS or Lou Gehrig’s disease, is dependent upon the outstanding partnership that has been built between current patients and staff from the ALS Center of Excellence at Michigan Medicine.

Given that the exact causes of ALS remain to be determined and there is no cure, clinical research, including both clinical trials and observational studies, are critical for medical progress. The U-M ALS Center of Excellence conducts both types of patient-driven research to better understand the disease and unveil new treatment opportunities. 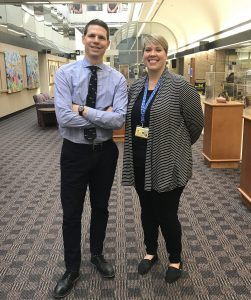 “We need to continue doing research so that we can one day find a cure,” says Jayna Duell RN, a research nurse and study coordinator at the U-M Multidisciplinary ALS Clinic.

“The only way we can find a cure is if we really understand the cause of the disease,” Duell says. “So, we need to continue to do research to learn more about why people are getting this disease. Then we need to do more clinical trials so that we can try to determine if there is a therapy to slow or halt the progression of this disease.”

Most clinical drug trials offered by the U-M ALS Center of Excellence are Phase 2 and Phase 3 studies. The overall objectives of Phase 2 studies are to determine whether experimental drugs are safe in persons with ALS and also whether there is any indication of a positive impact on disease. If a Phase 2 study is promising, the drug will often move into a Phase 3 study to determine if it works; these studies are often performed at multiple sites and sometimes around the globe. If a Phase 3 study is successful, a drug may be reviewed by the U.S. Food and Drug Administration for approval.

The goal of the U-M Multidisciplinary ALS Clinic is to enable every person that wants to participate in ALS research the chance to do so. Driven by their desire to find a future cure, persons with ALS are more than willing to contribute to the research despite extensive appointments and sometimes long commutes to the clinic, explains Blake Swihart, who is a study coordinator and project manager at the clinic.

“As you walk in the door, people are actively wanting to be engaged in the studies,” Swihart says. “That’s a testament not only to the work that Jayna and I do, but also to the patient population that is desperate for some sort of treatment, if not a cure, for the disease.”

Those that are interested in participating, Swihart says, are wholeheartedly invested in their contribution.

“I participate in research because if no one volunteers then how will there be any solutions for this horrible disease,” says Randy Wylie, a patient in the U-M clinic. “I’m hopeful there will be something to help me, but at least I know I’m contributing to research that will help the next person.”

Duell and Swihart both expressed that patients are often inspired to offer assistance in any way they can.

“‘I want to be of some benefit to finding answers,’ they’ve just got that mentality,” Duell says. “Patients are willing to do a lot of research, whether it’s just blood draws, or surveys or a clinical trial.”

Duell and Swihart are both integral components in pursuing that cure, coordinating and organizing the research studies that bring U-M closer to better information and treatments for ALS, says Stephen Goutman, M.D., M.S., who is the director of the U-M Multidisciplinary ALS Clinic.

“Jayna and Blake are unique because they communicate regularly with our ALS patients and their families, and then also see the research that is taking place in the laboratory,” Goutman says. “The partnership we have with our patients is imperative to understanding ALS and developing new treatments. For example, our publication in March that reported on environmental toxins in the state of Michigan was based entirely from the blood specimens provided to us by our patients.”

BUILDING A BOND WITH PATIENTS 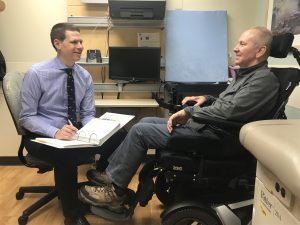 Swihart discusses a research study with a patient.

Swihart’s start with the ALS clinic was prompted by a desire for increased patient contact, he says. A graduate of Indiana University and McGill University, Swihart worked at U-M’s cancer center for five years working on clinical trials and investigator-initiated studies before he joined the U-M ALS Clinic in 2013.

In the ALS clinic, Swihart enjoys the opportunity to work face-to-face with individuals and their families, as compared to his previous clinical trial experience which dealt with quantitative data. This shift has allowed him to form personal connections with the patients.

“I was dealing with patient data and records (at the cancer center). I knew the people really well, but I only knew them because I was reviewing their medical records for potential research,” Swihart says. “Now I have a three-dimensional picture because I am able to talk to them, to meet them, and work with them to combat this disease.”

While the lengthy visits are medically focused, Swihart stresses the importance of conversation beyond one’s condition and acknowledging the humanity of the person with ALS.

“They are people with a disease, not the other way around,” says Swihart, “Many patients have kids or grand kids, lives to live away from the clinic. It’s satisfying to be able to form a bond. I think it’s vital.”

Swihart notes that self-reflection is a natural consequence of the relationships formed through the clinic.

“When there’s someone who is 47, and that’s as old as my brother, you start thinking about your own life,” Swihart says. “You always have to put things in perspective.”

Before joining the U-M ALS Clinic, Duell was a nurse on the U-M orthopedic and trauma unit, which she describes as a very physically demanding job. A U-M graduate and avid football fan, Duell participated in a U-M women’s football camp in 2011, during which she broke her hand. Unable to work while she healed, Duell learned about an opportunity to work with a stem cell trial in the U-M ALS Clinic. She was enticed by the new challenge because it would enable her to build longer-term relationships with her patients, a contrast from her prior role.

Duell says she spends hours with a patient at each research appointment in the clinic over the course of months or years. 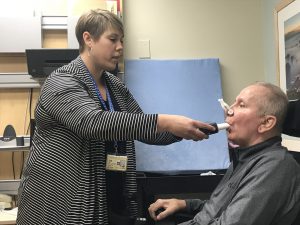 “I get to know them as a person rather than an ALS patient,” Duell said. “I get to know about their hobbies and interests — who they were before they had ALS – knowing them on a human level builds that connection more quickly.”

To her, the effect of these relationships extend beyond the clinic, Duell says. She draws inspiration by watching patients’ family structure and support system strengthen over the course of the disease.

“When I see the patients and what they’re going through and how their families step in,” Duell says, “it certainly impacts me emotionally and impacts the decisions in my life – what I want to do with my family and how I want to be.”

“To me, they have gone over and beyond to make things possible for me that I wouldn’t do on my own,” says Joe Feudi, who is a U-M patient.

To the patients and families impacted by ALS, the clinical progress Duell and Swihart are a part of is purpose-giving.

“Research is one thing that is giving them hope,” Duell said.