The inaugural Robert A. Epstein and Joan M. Chernoff-Epstein Emerging Scholar is Ben Murdock Ph.D., and we caught up with him about the research this gift will support. 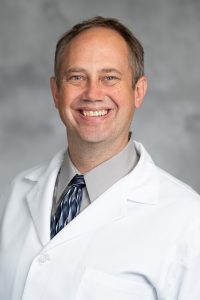 Why is studying the immune system important for understanding ALS?

While we think that the immune system doesn’t necessarily cause ALS, Dr. Murdock believes it does dictate disease progression.   “A cure for ALS is aways off right now,” he explains. “So, if we can manipulate the immune system to buy some more time for patients, then we can look for ways to find better treatments and eventually a cure.”

The lack of research into sex-based differences in disease

There has been a recent push by the NIH and other government agencies to accelerate the study of sex differences in biomedical research, which has been historically concentrated on male subjects. In Dr. Murdock’s research on ALS, sex-based differences have proven to be extremely important.

“It turns out men and women are different, who knew?” jokes Dr. Murdock.  Studying both male and female subjects was exactly how Dr. Murdock “stumbled’ upon his current project. He noticed differences, including the fact that men are considerably more likely to contract ALS, generally by a 60-40 ratio.

“We realized there was a story here and something we needed to explore,” reports Dr. Murdock. “There had to be something underlying this difference, which is especially prominent among younger patients.  There, the difference between men and women increases to 75-80%. People have known this for years, and everyone has just said, ‘that’s the way it is.’ Well, maybe, but why?  How can we use this information?”

Do we have any idea why?

The hypothesis is that it is hormone-based, says Dr. Murdock.  Either the hormones themselves are directly affecting disease progression or their interaction with the immune system plays an important role.

“We know that hormones have a huge impact on the immune system,” he observes. “We think that hormonal changes in men and women are affecting the immune system, which then affects ALS.  The fact that you see ALS dramatically shoot up in women around menopause is one of the reasons we began to look at this.” 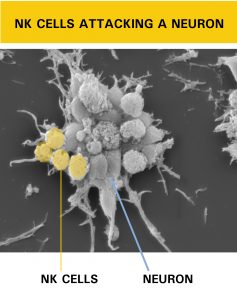 Dr. Murdock is conducting a translational study, looking at tofacitinib, a drug already approved by the FDA for other purposes, as an immune-modifying drug to treat ALS patients.  He has already passed the first hurdle for drug approval by publishing a paper demonstrating that tofacitinib does indeed impede NK cells, a driver of ALS progression.  Dr. Murdock is now testing the drug on larger ALS models to see if it affects survival, weight loss and motor function, while also studying immune markers through inflammation changes and gene expression.

What the Epstein gift will make possible:

In biomedical research, there can be a frustrating disconnect between promising therapeutic laboratory developments and attracting industry support to move them into clinical trials.  “As an academic, you have a great idea — a drug, pathway, therapeutic target — but you don’t have the money to get it off the ground,” explains Dr. Murdock. “Industry has all the money, but they don’t have all the ideas. So, there’s this interface between the two, called the ‘valley of death.’

“We will use this generous award to bridge the gap with tofacitinib and prove viability both as a treatment for ALS – the preliminary data is very promising – and as a sound investment.”

His reaction to being named the Epstein Scholar:

“I’m usually not one to seek out awards and attention,” says Dr. Murdock.  “I’m more of a workman, who focuses on the job at hand.  However, this award really means a lot to me.  I think I’ve done a lot of great work and have a lot of great work still in me, so I’m truly grateful for not only the recognition and support but the faith and belief the Epsteins have placed in me.”

It started in High School. A love of science, particularly biology, began in 10th grade, thanks to a favorite biology teacher.

“He was a fantastic teacher, very funny about it and made it all interesting,” Dr. Murdock remembers.  “He never shied away from questions, no matter how inappropriate.  I went to a Catholic high school, so he was a Christian Brother.  You always have the mouthy guys messing around. They would ask, ‘Do you have a problem with evolution and being Christian?”, trying to get a rise out of him.  He would just look at them blankly and say “No,” moving on with the lesson. Despite all that, I thought I wanted to be an engineer.”

The jump to immunology:

Dr. Murdock explains that he always had done well in math and didn’t want to pursue a “fluffy” major in college. He wanted to prove he was a “hardcore STEM person” and chose engineering.

“I took one college-level calculus course and said to myself, ‘Nope, I’m not doing this for the rest of my life.” I absolutely hated it and jumped out of engineering.  I think my pride kind of kept me from jumping out of STEM completely, so I switched to microbiology and genetics. People joked that I bailed out of a hard major and into a hard major.”

Dr. Feldman stated “Ben Murdock Ph.D., the entire staff of the Pranger ALS Clinic, the ALS Center of Excellence at Michigan Medicine, and the NeuroNetwork for Emerging Therapies, as well as myself personally, wish to express our profound gratitude for Bob and Joan Epstein’s gift. Their donation will support our investigations into several aspects of the causes of ALS and therapies to combat the disease, as well as assisting Dr. Murdock in establishing his career as a scientist in ALS research. And on a personal note, getting to know Bob and Joan, and the friendship that I have developed with them, has been very special to me.”