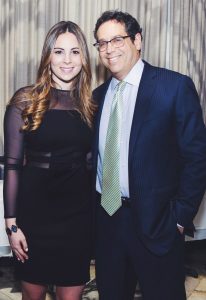 Ann Arbor – For Lauren Hendel, the fight against ALS became personal when she went home for Thanksgiving last fall. That’s when she and her brothers learned that their father, Stu, had been diagnosed with the disease.

Since then, Hendel, a 19-year-old sophomore in the University of Michigan’s Ross School of Business, has turned her attention toward raising awareness – and money – in the fight against ALS. First, she founded A Lot Stronger (ALS) Together, the university’s first student-run organization dedicated to ALS.

Then she enlisted club members, sorority sisters, Facebook friends and just about anyone else she could find to support ALS Together’s team in the Big House 5K run held April 9. The team raised nearly $4,000 to support the University of Michigan Comprehensive ALS Clinic, one of the race’s six local charity beneficiaries of the race. The total was the most of any fund-raising teams to participate in the race. 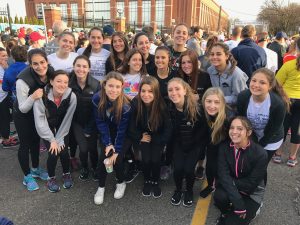 “Since I found out my dad was sick I’ve learned a lot more about ALS, and it’s a horrible disease, as bad or worse than cancer,” said Hendel, of Westchester, New York. “There needs to be some sort of awakening toward ALS. The University of Michigan has some of smartest students in the nation, so hopefully we can get someone to advance the research or maybe even find a cure.”

Two other teams – Feudi Strong and the ALS Clinic Staff – also raised money for the U-M ALS Clinic. Through race registrations, individual donations and the racing teams, the Clinic has received nearly $24,000 through the Big House 5K. The final distribution will put the total closer to $25,000.

Upon its formation, ALS Together used the Big House 5K to raise more than $3,800 for the U-M Comprehensive ALS Clinic – money that goes directly to care and treatment for ALS patients, and supports U-M’s broad research effort into the disease. Overall, through race registrations and direct donations, the Clinic has received nearly $24,000 before the final distribution.

“We were incredibly fortunate to have been selected as a recipient of the Big House 5K this year,” said ALS Clinic Director Stephen A. Goutman, MD. “A pulse of money like this helps us provide more services to ALS patients, which is a tremendous relief for them and for their families. I cannot truly express how grateful we are.”

ALS – amyotrophic lateral sclerosis, also known as Lou Gehrig’s disease – is characterized by progressive muscle weakness that robs a patient of limb use, the ability to swallow, and finally the ability to breathe. There is no cure, and most ALS patients survive 3-5 years after diagnosis.

The University of Michigan Amyotrophic Lateral Sclerosis Clinic, an ALSA certified center for more than two decades, is committed to providing compassionate care to patients with ALS. Research has shown that active, aggressive management of amyotrophic lateral sclerosis enhances patient survival, and more importantly quality of life, and that’s exactly what we do in the University of Michigan’s Multidisciplinary ALS Clinic. The U-M multidisciplinary team assesses the needs of each patient and develops an individualized care plan that addresses every step of the ALS journey. Once a patient is diagnosed with ALS, our team immediately begins its work implementing a wide array of clinical services designed to assist families and maximize patient health and function, including physical, occupational and respiratory therapy, dietary counseling, social work and a chair specialist.

For Lauren Hendel, the Big House 5K is just the beginning. She and her fellow ALS Together club members are already planning more events for this fall, including an extension of the Ice Bucket Challenge: A huge dunk tank on the U-M campus to raise even more money for ALS research.

“I know there are so many students who participated in the Ice Bucket Challenge and didn’t even know what they were raising money for,” she said. “I know we can do something great.”