The legacy of Dr. Randall W. Whitcomb lives on as his family provides a generous gift to fund genetic testing for Pranger ALS Clinic families.

Dr. Randall W. Whitcomb’ son, Kevin, states clearly and with love, “My dad didn’t lose to ALS in April of 2020, he passed the baton to my mother, my sister and myself, to keep fighting the battle.” 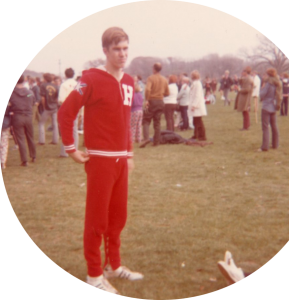 In his honor and memory, his wife, Rita; daughter, Katie; and son, Kevin, have given the Pranger ALS Clinic at Michigan Medicine a generous gift to provide genetic testing to ALS patients and their families through The Randall Whitcomb Fund in ALS Genetics.

Dr. Whitcomb was born in 1954 in Chicago Heights, Illinois, and raised in Racine, Wisconsin. As a youth he had a passion for competitive running and set a state record in the mile with a time of 4 minutes and 4 seconds. He attended Tabor College in Hillsboro, Kansas. He proceeded to the University of Kansas Medical School and graduated with honors in 1981, did his residency in Internal Medicine at the University of Kansas and was honored there with the Milton McGreevy Award as Outstanding Resident in 1984. In 1985, Dr. Whitcomb began his Fellowship in Endocrinology at the National Institutes of Health(NIH) in Bethesda, Maryland and following its completion, joined the faculty at Harvard Medical School and became an attending physician at the Massachusetts General Hospital in Boston.

Dr. Whitcomb and his family later became residents of Ann Arbor, Michigan, where he was a Senior Executive at Park Davis Pharmaceuticals. His career also included co-founding QuatRx Pharmaceuticals, and was a Senior Advisor at Frazier Healthcare Partners, as well as serving on numerous boards.

Throughout his career in the pharmaceutical industry, Dr. Whitcomb staffed the Hope Clinic, which provides care to the underserved patients of Washtenaw County.

Dr. Whitcomb met his wife of 44 years, Rita Kreutziger, at Tabor College, and had two children, Katie, born in 1981, and Kevin in 1984. Dr. Whitcomb’s greatest treasure was his family and he is survived by his wife, children, numerous siblings and grandchildren.

The Whitcomb’s family’s gift will assist patients of the Pranger ALS Clinic at the University of Michigan in covering the costs of genetic testing to be performed clinically, or in conjunction with research. Approximately 15 % of ALS patients are thought to have a familiar, or genetic, connection to ALS, and this gift will allow those patients with a family history, to have definitive proof of a genetic link to the disease. Genetic testing is not traditionally covered by medical insurance, and can be cost prohibitive to many ALS families, therefore, this gift by the Whitcomb family will be a significant help to those families in their investigations.

Donate to The Randall Whitcomb Fund in ALS Genetics